The sport of basketball is not complex, but to the uninitiated, the series of lines and markings on a basketball court can look like a confusing set of hieroglyphics. What does it all mean? 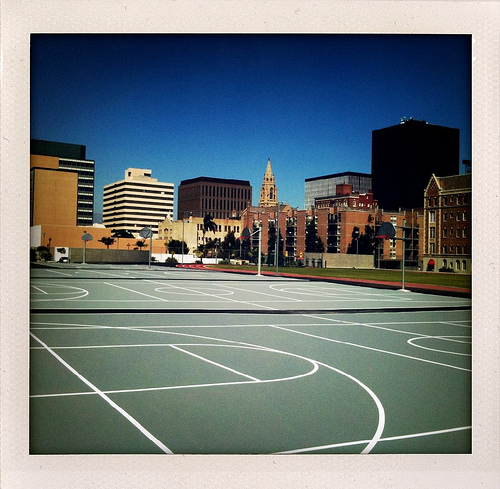 How do I draw basketball court lines?

To begin with, the sidelines are the two boundary lines that span the length of the court. A full-size court is 50 feet wide, although there are plenty of basketball courts in parks and smaller gyms that are not regulation size. The length of the two sidelines and the two baselines represent the court's complete "in bounds" playing area. The aforementioned baseline is also referred to as the endline. The baseline/endline runs from sideline to sideline behind the baskets at both ends of the court. Both baselines are 4 feet behind the basket, and normally have a width of 50 feet. The two baselines on a full-sized regulation court are 94 feet apart, but, again, many courts are not regulation size and are frequently shorter than this. In the center of the floor, the midcourt line divides the court in half.

The rules state that when the team on offense (the team with possession of the ball) brings the ball across midcourt by way of a pass or a dribble, the offense cannot reverse field and bring the ball back behind that midcourt line, or else the referee will call that team for a "backcourt violation," or "over and back," and the team will have to surrender possession to its opponent. The offensive team only has 10 seconds to advance the ball across the midcourt line (eight seconds in the NBA).

Field goals (baskets during the flow of action) made from outside the arc that forms a semi-circle from side of the baseline to the other corner count for three points. How far the three-point arc is from the basket depends on the level of amateur or pro basketball being played. Any baskets made inside the arc count for two points. Fifteen feet away from each basket is a straight line running parallel to the baseline that connects both sides of the lane (or the "paint'), and this is where players attempt free throws from when the referees call a shooting foul (a defensive violation while the offensive player is in the act of attempting a field goal). The free throw circles have a diameter of 12 feet and come into play on free throws and jump balls. During a free throw attempt, the shooter must remain inside the free throw circle. On jump balls, non-jumpers must remain outside the circle until the ball is tapped by one of the jumpers.

Lane lines are boundaries than span from the free throw line to the baseline. The width and shape of the lane lines vary depending on whether it is an amateur or pro game, and the size and shape of the lane also differs in international competition. The lane lines also contain lane spaces markings used to align and separate the non-shooters. The first lane space, on both sides of the basket, are occupied by the opposing team from the free throw shooter. Non-shooters cannot step into the three second area until the ball leaves the hand of the player attempting a foul shot.