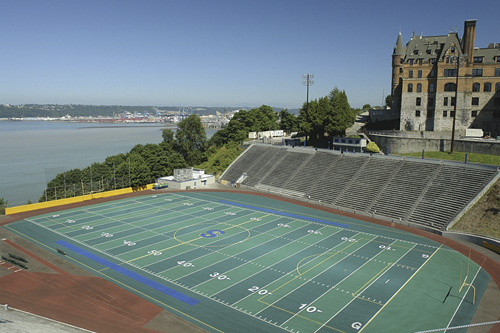 Football fields in the United States sport different dimensions than those in Canadian Football, which plays by different rules with a field that is both longer and wider. For the uninitiated, some of the lines and markings on an American football gridiron can be quite vexing, especially when considering that some dimensions are different in amateur football (college, high school and Pop Warner) than they are in the pros.

What are standard football field lines and markings?

To start with, every football field is 100 yards long, at every level the game is played. The field, end zones included, is a rectangle that measures 360 feet long by 160 feet wide. In 1933, two rows of hash marks were added near the center of the field at 1-yard intervals so that at the end of every play, the ball would be placed on the nearest hash mark. Prior to the rule change, all plays began where the ball was declared dead. The midfield hash marks in high school and college football are further from the center of the field (and closer to the sidelines) on each side than they are in professional football, where they are located 70' 9" from the sidelines. High school hash marks are 53'4" from the sidelines while NCAA hash marks are 60' from sidelines. Sideline hash marks are individual yard lines running the length of the field in 1-yard increments.

The 6-foot wide white line surrounding the field of play is the sideline and represents the boundary for what is out of play. The yard lines on the football field are white vertical lines running the width of the field in 10-yard increments. The numbers run from 10 to 50 and then back to 10. Each yard line is numbered. In the NFL and in major college football, next to each number is an arrow, pointing towards the closest end zone. These arrows began appearing on NFL field in the late 1970s, by which time virtually every league game was on television. This is why many high school football fields still do not have the arrows - those games are generally not televised, so there is no need for the arrows.

The line that separates the end zone from the field of play is the goal line. The team with the ball tries to cross it, the team without the ball tries to protect it from being crossed. Crossing the goal line with the football is worth six points. A field goal kicked from the field of play (usually on fourth down) through the goal post's uprights is worth three points. High school goal posts are 23'4" wide and 20' tall from ground. NCAA goal posts are 18'6" wide and 30' tall poles from ground.