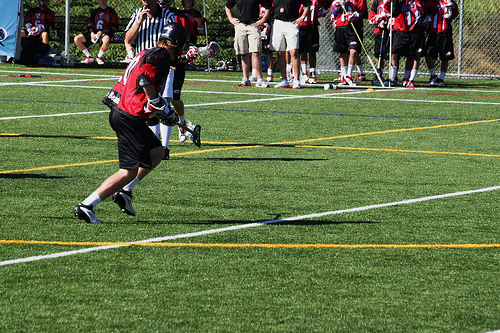 A sport whose recent growth in popularity can match that of just about any other in the country, lacrosse is being played by a lot more youths at the lower levels and in high school now than ever before. Whether you are a player, a budding coach or a parent with a potential lacrosse star, it would behoove you to understand the rules and know what all those field lines and markings on a lacrosse field actually signify.

What are the standard lines and markings in lacrosse?

The midfield line is where the faceoffs take place, including the one that starts each game. The four lines that outline the perimeter of the field separate the area of play from what constitutes out of bounds. A player who has his or her foot across any of these lines is considered out of bounds. Both goals have an area in front of them known as a crease, and this area is deemed off limits for the offensive players. They are not allowed into the crease, and must attempt any shots from outside this crease. Defensive players, however, are allowed to venture into the crease. Each side of a lacrosse field has two lines that you can't cross over if you are a midfielder or an attacker until the faceoff is over and one team has secured possession.

The size of a regulation lacrosse field is 60 meters wide by 100 meters long (65.62 yards x 120.30 yards). A woman's lacrosse field used to have different dimensions than that of a men's lacrosse field, but recent international changes made the field size for both genders universal. The radius of the goal crease is 3 meters, or 3.28 yards. The space behind the lacrosse goal is 13 yards. The substitution area is 13 meters, or a shade larger than 14 yards.

The midfield line divides the length of the field in half. Markings on the midfield line include perpendicular markings for the wing area, which is marked 10 yards in from the sidelines (20 yards in from the center) of the field. The "attack area" and "defensive area" are marked 35 yards from the end lines of the field. These lines designate the number of players allowed in each of these areas. A regulation lacrosse goal measures 6 feet high by 6 feet wide by 7 feet deep.

What are the basic rules of lacrosse?

There are 10 players per side on the field at any one time in lacrosse, including the goalkeeper. The sport consists of four positions: midfield (sometimes referred to as "middies"), attack, defense and goalie. There are three attackers, three middies and three players on defense. Lacrosse games are four quarters, with length of the quarters increasing from eight to 15 minutes as the levels go up from youth to high school to college to pro to international. Teams trade ends of the field at the end of each quarter.