Where Do Missed Shots Go? 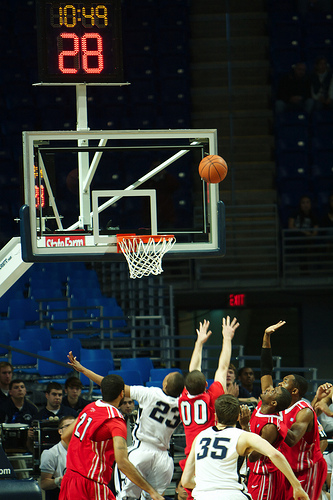 Far too many amateur basketball players are, unfortunately, experts on the art of the missed shot. Even the best three-point shooters in the NBA rarely exceed a 50 percent accuracy rate from that distance beyond 20 feet, so the weekend warrior is likely to fall far short of that mark even if the NBA All-Star finds it a challenge. For many amateur players, as well as defenders and potential rebounders, figuring out the physics of where a missed shot will carom off the rim and which direction it will travel can provide a competitive advantage.

What the Data Says

In basketball, where on the court do most 3 point attempt rebounds occur?

Data from SportVu shows that we can actually tell with some degree of reliability where the rebound is going to land depending on where the shot is attempted from on the floor and what part of the rim it hits. A three-point attempt that is missed from one corner tends to go to the opposite side of the floor much more often than it caroms back toward the originator. The most common location for a missed corner three-point rebound is below (closer to the baseline) of the low block on the weak side.

The data also shows that shots from one side of the court more frequently carom off toward the other side of the rim. Also, the team on offense is much more likely to get the rebound of their teammates' missed shot if that shot is attempted from close to the rim (a layup, short jumper or finger-roll) than if it is a perimeter jumper. The longer the distance of the shot, the farther away from the rim the rebound is likely to land--so missed three-pointers are a lot more likely to lead to a fastbreak the other way than a missed layup would. Studying these patterns of rebound tendencies can actually help players gain a competitive advantage, and might enable a player or a team with a height disadvantage to still get more rebounds than their opponent does.